The old Yellow black racer limited edition from 1973. this car is 1 of 2 that exist in Turkey. The car was only produced in a volume of 3500 and only sold in Germany. There are only about 90 existing cars and they are nearly all owned by either Germans or Dutch.

My car was brought into Turkey in 1974 by a Turk who was living in Germany when the cars came on the market. He kept it for 38 years and i bought it from his son after he sadly died. The car has an authentic 63000 kms on the clock, its easy to tell because the unique interior that was used on this marque is almost perfect.-it drives like new and its 50bhp pulls well in modern traffic.

VW this year have announced that they will produce a commemorative model to celebrate the 40 year 'birthday'--i doubt i will be able to afford the new model but i am looking for a yellow or black new shaped vw to enjoy in Turkey.

İ can't get any pictures that are small enough to download here!!!-

--İ am looking for new shaped beetles in Bulgaria because it is almost impossible to get them in Turkey!
Последна промяна от de1amo на Вто 12 фев 2013 18:01, променено общо 1 път.

Hi Greg and welcome, I suppose you could try resizing the pics? It would be interesting for us to see them

Varbona написа:Hi Greg and welcome, I suppose you could try resizing the pics? It would be interesting for us to see them 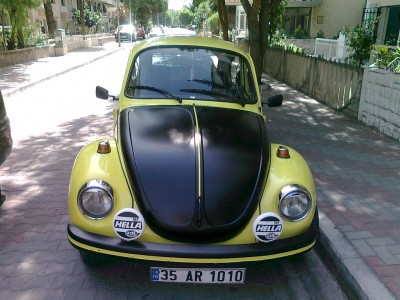 WOW! It is so shiny! Congratz mate.